It Started with Lunch…

Yes, really.  After an Oprah show about puppy mills in 2008, two friends went to lunch and asked each other a question… “How can we do more?”  A pet-sitter and a graphic designer who wanted to give more – more money, more time, more than they could give by themselves – to support their passion, dogs!  They weren’t alone.  After a bit of brainstorming, a fundraising dog wash just seemed like a fun idea.  And isn’t ‘fun’ part of fundraising?  They shared their idea with friends and family and the idea grew.  Everyone wanted to help.  So they turned to their community, looking for sponsors, and again, everyone wanted to help.  The idea was now more than an idea, it was an event – a yearly event to raise money for dog based charities in their neighborhood. After the first few years of the dog wash, meeting amazing rescues and shelters, the ‘rescue’ bug took hold. Elizabeth had already been fostering senior dogs and had a grasp on that end of the rescue world. Jennifer began working with a few area rescues, learning about high kill, out of state shelters, and how transport works. Today, Save-A-Mutt is a full fledged 501c3 rescue that saves hundreds of animals each year. They work to find forever homes for dogs, cats, puppies and kittens. ‘Fun’draising is still very much a part of their organization, but now they work with an amazing team of board members, volunteers, fosters and rescue partners.

Scrub-A-Mutt’s first annual dog-washing fundraiser was on Sunday, August 17, 2008.  The newspaper got the date wrong. Nobody knew where the park was. Yet, they washed 25 dogs that day, and made over $1000. Over the years, the numbers of dogs washed increased. At the last official Scrub event, the volunteers washed over 300 dogs – it was amazing. In 2014, Scrub-A-Mutt became Save-A-Mutt and we transformed from a fundraising group, to a rescue/dog saving organization. Our man relationships with sponsors, volunteers and the other “crazy dog people” in our community made the transition easy. In 2019, Save-A-Mutt installed a board of directors, while Jennifer and Elizabeth stepped back as Executive Directors. The purpose was to give SAM new blood and help with new growth, allowing Jenn and Elizabeth focus on their passion of rescue . 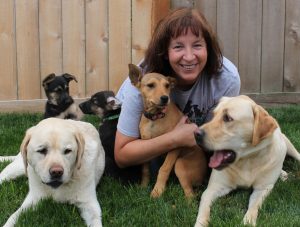 When Jennifer went to Washington State University – her major was actually veterinary medicine.  But a couple years later – she changed direction and started to focus more on her creative side.  Still, the love of animals that was there as a little girl never left her. Everything from the name of her design company, Pick Of The Litter Design; to her office decor – a vast collection of dog art; to her office mates – four footed partners;  Jennifer’s definitely a crazy dog lady! And when she interviewed Elizabeth in 1999 to be her pet sitter – the seed of friendship was planted.  Little did they both know – how that friendship would take them to great places in the world of pet rescue. A move to 15 acres allows more fostering of many prison break puppies, dogs requiring quarantine or isolation, and even special needs care. Jennifer, husband Greg, and their pack of resident dogs have created a perfect home for ‘behaviorally challenged’ foster dogs to grow and prepare for a forever home. 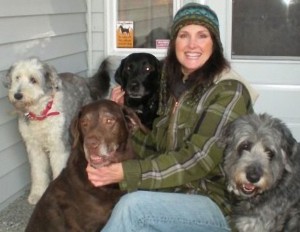 Since September of 1998, Elizabeth has been the owner and operator of Wag-A-Muffins Pet Care Services.  Taking care of so many cherished family pets over the years has not only taught her a great deal, but has created wonderful relationships with the families she works for. It was the relationship with her customer Jennifer, now a treasured friend, and a shared love of the animals that created Scrub-A-Mutt.  Elizabeth is the heart behind Scrub-A-Mutt’s devotion to rescue. She began fostering dogs for Old Dog Haven (ODH) in September of 2008, and quickly became a beloved “foster failure.”  Elizabeth is a “mom” to several senior dogs – but she can be found trolling the local shelters looking to save even more of these gray muzzled beauties. She is also “mom” to some special rescue cats.  The most important part of Elizabeth’s circle is her family.  Bill, William, Noelle, Stephen, and countless other family and friends of the heart.  Their endless supply of love and support allows Elizabeth to be who she is 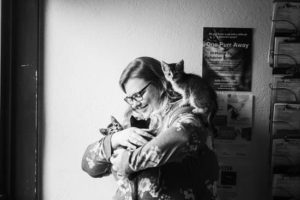 Amy Ferguson grew up in Eastern Washington and moved to the Seattle area in 1999. Before her career in animal welfare, she worked for a health insurance company in a variety of roles but felt something was missing. In 2009, she found her calling when she joined the board of directors for the ARF of Everett. Since then, Amy has worked for several animal welfare nonprofits and graduated in 2016 with a BS in Social Sciences and minors in Nonprofit Management and Business Administration. Amy is currently the executive director of Feral Cat Spay/Neuter Project, located in Lynnwood. Amy, her husband, Jonathan, three cats, and exuberant dog, Tally, live in downtown Everett and occasionally share their home with foster kittens. In her free time, Amy enjoys Zumba, exploring the PNW, and spending time with friends and family.

Kimberly Gauthier (go-tea-ay) has been a member of the Save-a-Mutt Universe for more nearly a decade.  Initially, Kimberly supported the organization by hosting a booth at the Scrub-A-Mutt events,  donating freebies she received from brands as a blogger to help dogs and puppies, and eventually attending rescue events.  As a member of the Save-a-Mutt Board, Kimberly is able to contribute to the rescue community, working with a team of people who are passionate about finding homes for homeless dogs.

Kimberly Gauthier is the founder and editor of Keep the Tail Wagging®, a blog about raising dogs naturally, Dog Mom Style, and Staying Home with Dogs.  Her mission is to empower pet parents to make better choices, speak up for their pets, and ask more questions.  Kim lives with her partner and five raw fed dogs and one demanding cat in Snohomish County, Washington.